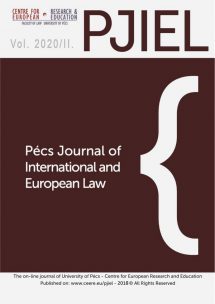 The editors are pleased to present issue 2020/II of the Pécs Journal of International and European Law, published by the Centre for European Research and Education of the Faculty of Law of the University of Pécs.

The editorial comments of the current issue address some aspects of the conflict in Nagorno-Karabakh. In this issue’s first article, Nives Mazur-Kumrić and Ivan Zeko-Pivač discuss the EU’s role as a global trendsetter in the fight against climate change, paying special attention to the funding scheme dubbed the Just Transition Mechanism. Sandra Fabijanić Gagro looks at the Responsibility to Protect through the lens of the protection of children. Petra Ágnes Kanyuk provides an appraisal of the effects of EU substantive criminal law harmonisation measures on Hungarian criminal law. Tomáš Strémy and Lilla Ozoráková ponder the possible impact of the introduction of the new offence of abuse of law on the independence of the judiciary in Slovakia. Upal Aditya Oikya considers whether atrocities against religious minorities of Bangladesh can be considered genocide. Finally, Ágoston Mohay provides a brief problem-raising overview of the responsibility of international organisations and their member states.

As always, a word of sincere gratitude is due to the anonymous peer reviewers of the current issue.

We encourage the reader, also on behalf of the editorial board, to consider the PJIEL as a venue for publications. With your contributions, PJIEL aims to remain a trustworthy and up-to-date journal of international and European law issues. The next formal deadline for submission of articles is 15 March 2021, though submissions are welcomed at any time.

NIVES MAZUR-KUMRIĆ – IVAN ZEKO-PIVAČ: The EU as a Global Trendsetter in the Fight Against Climate Change: Is a Climate-Neutral Europe by 2050 Feasible?

SANDRA FABIJANIĆ GAGRO: The Implementation of the Responsibility to Protect when the Protection of Children in Armed Conflicts within the UN System is Concerned – Who is Responsible?

PETRA ÁGNES KANYUK: Magic is not in it Staying the Same, but in the Changes–Legal Harmonisation of Substantive Criminal Law in the European Union and its Appearance in Hungarian Criminal Law

TOMÁŠ STRÉMY – LILLA OZORÁKOVÁ: The New Act Amending the Criminal Legislation in Slovakia and the Possible Impact of the New Crime of Abuse of Law on the Independence of the Judiciary

UPAL ADITYA OIKYA: Atrocities against Religious Minorities of Bangladesh: Can we Address it as Genocide?

ÁGOSTON MOHAY: The Responsibility of International Organisations and their Member States: an Overview of Outstanding Questions of Interpretation