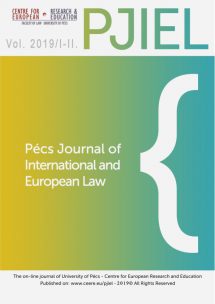 The editors are pleased to present the 2019 double issue of the Pécs Journal of International and European Law, published by the Centre for European Research and Education of the Faculty of Law of the University of Pécs.

In the Articles section, Ljubo Runjić analyses the consequences of the ex parte communications in the arbitration between Croatia and Slovenia. Botond-Zoltán Petres looks into the theory of Lex Mercatoria and its conceptualisation as an autonomous international system. Amna Hassan and Ahmad Hassan Khalid take a look at investment dispute settlement in the China Pakistan Economic Corridor context and its foreseeable regional impact. Olena Demchenko reviews some current challenges of electronic commerce in the gaming industry. Zsuzsanna Rutai considers the participation of children in standard-setting and monitoring efforts of international organizations. Finally, István Tarrósy examines the situation of the African diaspora in the Post-Soviet Space.

In the Case Notes and Analysis section, Joanna Mazur elaborates upon the challenges of the regulation of unjustified geoblocking, whereas Yll Mehmetaj and Nagip Skenderi investigate the role of customs budget revenues in economic development in Kosovo.

This issue’s review is not of a book but of a conference: István Szijártó reviews the Consensus Conference organised in Pécs in 2019 on migrant health issues, while giving his views on the significance of this issue in the context of EU asylum law and its planned reform.

A word of sincere gratitude is of course due to the anonymous peer reviewers of the current issue.

We encourage the reader, also on behalf of the editorial board, to consider the PJIEL as a venue for publications. With your contributions, PJIEL aims to remain a trustworthy and up-to-date journal of international and European law issues. The next formal deadline for submission of articles is 15 March 2020, though submissions are welcomed at any time.

BOTOND – ZOLTÁN PETRES – Which is the Lie: The Mask, or my Face? The Theory of Lex Mercatoria, an ‘Autonomous’International System in Disguise

ISTVÁN TARRÓSY – In Need of an Extended Research Approach: The Case of the ‘Neglected African Diaspora’ of the Post-Communist Space