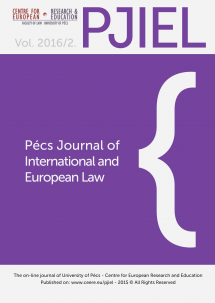 The editors are pleased to present to the reader issue 2016/II of the Pécs Journal of International and European Law, published by the Centre for European Research and Education of the Faculty of Law of the University of Pécs.

In the current issue, Cherry James looks at the consequences of Brexit on study mobility to and from the UK. Judit Tóth and her co-authors analyse the potential of adult education in the context of active citizenship. Barrett Jizeng Fan provides a detailed investigation of references made by the Court of Justice of the European Union to the case law of the European Court of Human Rights. Tamás Lattmann looks into the “ad hoc tribunalisation” of the International Criminal Court in the context of situations referred to it by the United Nations Security Council. Bianka Maksó delivers a brief reflection on the role of Binding Corporate Rules in the context of international data transfers. Finally, Bence Kis Kelemen reviews the book ‘The Drone A primer on the U. S. use of unmanned aircraft outside conventional battlefields’ published by Roman & Littlefield in 2016.

We encourage the reader, also on behalf of the editorial board, to consider the PJIEL as a venue for publications. With your contributions, PJIEL aims to remain a trustworthy and up-to-date journal of international and European law issues. The next formal deadline for submission of articles is 15 March 2017, though submissions are welcomed at any time.

Cherry James – Brexit: What now for Study Mobility between the UK and the EU?