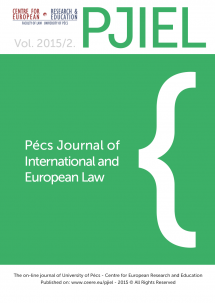 The editors are pleased to present to the reader the current issue of Pécs Journal of International and European Law, published by the Centre for European Research and Education of the Faculty of Law of the University of Pécs.

Our current issue looks at various issues of international and European law which are quite topical or carry great dogmatic importance.

In the Articles section, Ádám Lukonits firstly analyses whether normative rules aimed at democratization can paradoxically result in democratic deficits in light of their actual application and interpretation in practice, focusing on the rules of the nomination and election of the President of the European Commission. Emmanouela Mylonaki provides an overview of how Western Africa has responded to the development of the international law framework of counter-terrorism. Zoltán Papp provides a detailed international law analysis of the Air Defense Identification Zone, devoting special attention to rules and regulations pertaining to areas of airspace that do not fall under national sovereignty. Ágnes Töttős looks at the controversial issue of marriages of convenience as a means of abuse of rights in the EU migration law/citizenship context. Orsolya Szabó gives a brief account of the 2nd Hungarian-Sino International Forum organized in Pécs. As for this issue’s article focusing on developments in the Western Balkans, Nives Mazur-Kumric looks at the contested concept of citizenship in Kosovo. Finally, Marija Daka provides a review of the book entitled The Philosophical Foundations of Human Rights edited by Rowan Cruft, S. Matthew Liao, and Massimo Renzo and published in 2015 by Oxford University Press.

We encourage the reader, also on behalf of the editorial board, to consider the PJIEL as a venue for publications. With your contributions, PJIEL aims to remain a trustworthy and up-to-date journal of international and European law. The next formal deadline for submission of articles is 15 March 2016, though submissions are welcomed at any time.

Nives Mazur Kumric – Framing the Concept of Citizenship in a Contested Nation-State: Reflections on Kosovo